The first sixteen verses of 1 Corinthians 11 are hard to understand and sometimes controversial. It appears like Paul is contradicting other parts of the Bible and putting down women at the same time in this passage. What is going on here?

Now I commend you because you remember me in everything and maintain the traditions even as I delivered them to you. But I want you to understand that the head of every man is Christ, the head of a wife is her husband, and the head of Christ is God. Every man who prays or prophesies with his head covered dishonors his head, but every wife who prays or prophesies with her head uncovered dishonors her head, since it is the same as if her head were shaven. For if a wife will not cover her head, then she should cut her hair short. But since it is disgraceful for a wife to cut off her hair or shave her head, let her cover her head. For a man ought not to cover his head, since he is the image and glory of God, but woman is the glory of man. For man was not made from woman, but woman from man. Neither was man created for woman, but woman for man. That is why a wife ought to have a symbol of authority on her head, because of the angels. Nevertheless, in the Lord woman is not independent of man nor man of woman; for as woman was made from man, so man is now born of woman. And all things are from God. Judge for yourselves: is it proper for a wife to pray to God with her head uncovered? Does not nature itself teach you that if a man wears long hair it is a disgrace for him, but if a woman has long hair, it is her glory? For her hair is given to her for a covering. If anyone is inclined to be contentious, we have no such practice, nor do the churches of God.
1 Corinthians 11:2-16 ESV

Before we begin to look at this passage, let's remember some of our guiding principles for interpreting the Bible. There are three things that will help us make sense of this passage. First, in the guide on Progressive Revelation, we learned that for some passages of Scripture, we can come away with several reasonably possible interpretations of what it means. Because the Bible is unified in its Christ-centered meaning, we know that the only valid possible interpretations are those that are in sync with the whole Bible. In other words, if what we think Paul is saying in 1 Corinthians 11 contradicts what we know from Genesis 2, then we are mistaken in what we understand the Bible to be saying somewhere. The Bible is not mistaken.

Second, let's also remind ourselves of our approach to interpreting Scripture. In the guide on Biblical Meanings, we learned that there are

two sets of questions about the author of the biblical books we’re reading. Each set of questions should inform the other.

For this passage, these questions mean we want to know about Paul's historical context. What was happening with the church at Corinth then? What did short or long hair mean? We also want to know what the Corinthian church and the church more generally did with Paul's first letter to the Corinthians. Did women wear a veil or headcovering? How did they understand this part of Scripture?

Thirdly, let's make sure we understand the genre of the passage and whether there are any literary devices being used here. It turns out that not only is our passage of 1 Corinthians 11:2-16 a chiasm itself, but it is part of a larger chiasm that includes 1 Corinthians 11-14. Here's the structure of that long chiasm:

Knowing about this long chiasm, we see that the main point of it all is centered on Christ-like love. Paul's hymn to love (12:31-14:1) is the hinge on which our passage (11:2-16) turns. We also see that our passage is related to 14:33-36. This has a similar tone and theme about men and women at worship to our passage.

As in all the churches of the saints, the women should keep silent in the churches. For they are not permitted to speak, but should be in submission, as the Law also says. If there is anything they desire to learn, let them ask their husbands at home. For it is shameful for a woman to speak in church.
1 Corinthians 14:33-36

The chiasm of our passage can be modeled like this:

Within this chiasm, Paul follows a line of thought about men and women prophesying, their hair length, and their origins and authority. This line of thought climaxes in verse 10, which seems to say that women should have someone or something of authority on their head, because of angels. Then, at the beginning of verse 11, Paul uses a Nevertheless (Greek: πλην) and restates that same train of thought with more correct statements about women and men and their hair.

The Nevertheless (πλην) at the start of verse 11 is a "However" in the NASB. Paul uses this word within this chiastic literary structure to alter, counter, or improve on what preceded it. Given this, it's possible that verses 2-9 contain what the Corinthians themselves believed.

In verse 3, Paul states that there are three relationships where one party is the head of the other.

The second relationship would be more accurately stated as a man is the head of a woman, because Paul is not talking about marriage here. Most English translations other than the ESV get this right. Every mention of husband and wife in this passage should be and usually is translated as man and woman.

When I read head in these statements, I would ordinarily think about leadership, like the head of an organization. This understanding of head (Greek: κεφαλη) as leader, however, is almost never used in either Classical or Biblical Greek. Instead, head usually means source or origin. That's because in ancient Greece a person's physical head was thought to be their energy source for life, and so head (κεφαλη) came to be used as a metaphor for the source of life. Thus, these three statements about relationships refer chronologically to the origin or source of the second party in the first.

When Paul restates these relationships from verse 3 later in the chiasm in verses 11-12, he does so to make the important point that both men and women have a common origin and a mutuality. His emphasis is not on male authority but mutual interdependence. In fact, Paul never uses any Greek words for leaders when referring to husbands in any of his letters. Further, what is often missed about this passage is that both men and women are praying and prophesying in public.

Because there is no Greek word for hat, veil, or anything like that in this passage, it's most likely not referring to those things. Instead of headcoverings like hats or veils, this passage is most likely talking about hairstyles as literal coverings for your head. Thus, instead of hats or the headship of men over women, Paul is talking here about gender-specific hairstyles that were appropriate within the culture of Corinth at that time. We can affirm this by looking at how this Scripture written by Paul was used by the church. 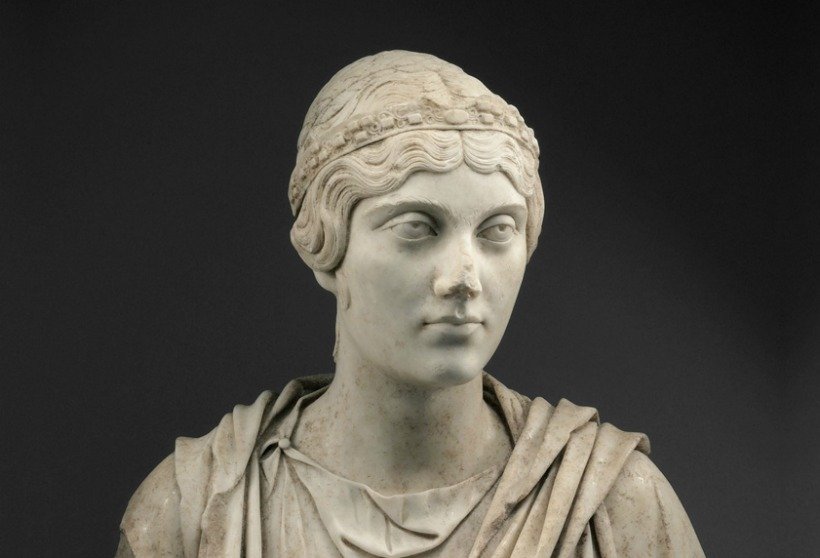 Numerous examples of Greek and Roman art show us that respectable women did not wear hats or veils. Instead, they wore their hair tied in simple braids or in bands. Their heads were uncovered in domestic settings like a house-church. In fact, it was against the law for any woman except reputable Roman matrons to wear the palla, a veil-like headcovering in public. There is no indication that Christian women ever routinely wore veils until the 4th century.

Even though Paul is not telling women to wear veils, verses 4-7 and their corresponding verses 13-15 do say that hairstyles for both men and women do matter. In short, hairstyles were affecting the reputation of Christians at Corinth.

The contrast in these pairs of verses is between disgrace and glory. A woman's long hair, used as a covering, is her glory (Greek: δοξα) and reputation. The norm for first century Roman women of all classes was to have long hair. In this passage Paul is referring to a practice among some Christians in Corinth to remove gender distinctions. They thought that the kingdom of God had fully arrived and abandoned gender distinctions to be like genderless angels. They imagined they knew better, but Paul sets them straight. In this culture, a woman's appearance and conduct affected the reputation (δοξα) and honor of her husband and other male relatives, which seems to be the point of verses 4-7. Some Corinthian Christian women were sullying the reputations of their husbands and fathers with their hairstyles, which is not an expression of Christ-like love.

What is really quite profound about this, however, is found at the centerpiece of this chiasm in verse 10. Here is Paul's assertion that a woman has her own glory and reputation (δοξα). It is without reference to others. He seems to be saying in verses 3-7 that, yes, those women are harming the reputation of these men. But what's more, in verse 10, he says that all women have their own glory, reputation, and honor to take care of as well. He goes on in verses 13-15 to elaborate on the interdependence of men and women. Paul is telling the men and women of Corinth to do what it takes to have good reputations and honor within the Corinthian community. Show love to yourselves and to each other. Don't be self-centered, but have a heart of Christ-like love that rejoices with truth. That self-sacrificing love is neither rude and dishonorable nor arrogant and selfish (13:4-5).

This convoluted and difficult passage becomes clearer when we use some of our interpretive tools. We allow Scripture to interpret Scripture. We know from Genesis 2 that God created both men and women, and that both men and women are His imagebearers. There is nothing in Genesis 2 to suggest that women have a lower status than men. We are also helped in our understanding of this passage by recognizing its chiasmic structure, allowing this literary device to help us see its central main point.

Related to Gender and Hair in 1 Corinthians 11